From 2016 to 2019, I led somewhere north of 15 iterations of SoundMind — a workshop that combined meditation, sensory awareness, and aesthetic activation of the breath, body, and voice. Individually, in pairs, and as a group, participants explored resonance and vibration through touching, listening, and collaborative creation.

Though I had the opportunity to present SoundMind at Westminster Choir College and the Brattleboro Museum and Art Center, the bulk of the workshops were hosted by the Tang Museum, whose site-specific installations I often used as a source of inspiration in the course of developing each workshop. The Tang just published a beautiful catalogue that includes images of some of the first of these workshops, which were held in Liz Collins’ Energy Field installation.

2019 has been a year when I have really returned to songs and songwriting, probably my first important creative outlet. I think I wrote down my first songs when I was in 3rd or 4th grade — part of a planned musical exploring the “offstage” antics of two weasels, minor characters in The Wind in the Willows. I don’t think I realized how much I missed it until I got back to it. 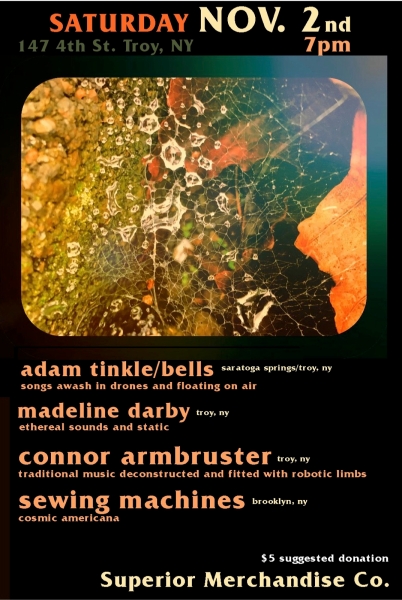 I remember the sting of being called “tinklebell” or “tinkerbell” in about second grade. Years later, someone I did graduate school with told me how charmed everyone was

when the list of incoming students was circulated, remarking that I had “such a musical name.”

The “band” responsible for the return of my songs is nascent, but for now it seems to be called adam\tinkle/bells. There is an album in the works.

Somehow, I never managed to make a timely post about the many installations and large quantity of music that I’ve been making as a member of the collaborative  Seven Count, alongside Jake Nussbaum and Angus McCullough.

We recorded our first album in 2016, largely in the carriage barn at the Park McCullough House, North Bennington, VT (in the background of the gif).

Here’s me in the superstation at the heart of Invitation, the exhibition we made in May-June 2017 , in a wonderful gallery called Border Patrol, in my hometown of Portland, ME.

We documented and catalogued that installation on a series of custom collaged cassettes, which we collated into a small edition tape called An Invitation Clock

…which was exhibited at several art book fairs (Boston, New England, Overland, all 2017), alongside a zine catalogue of the show.

Here’s a shot of our next installation, Request Line (BUOY Gallery, Kittery, ME, Augu 2017) 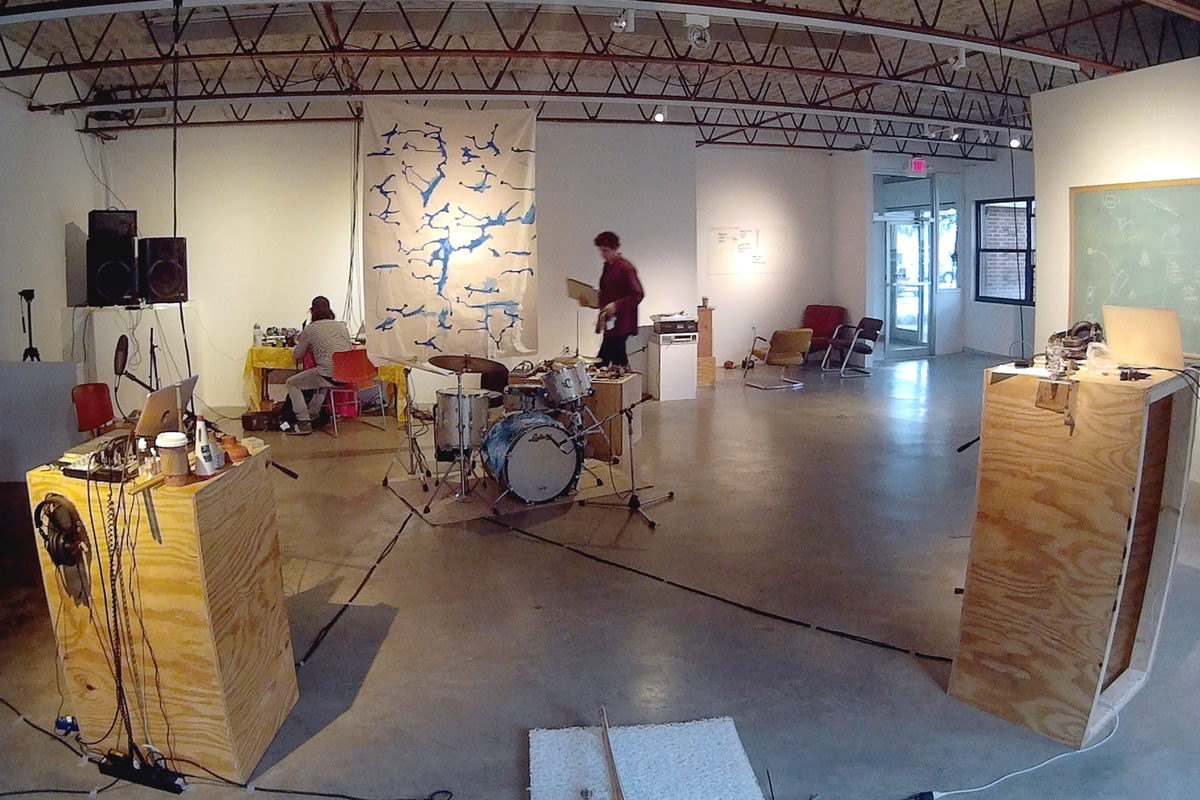 I hope to add more documentation here when I get around to it!  In the meanwhile, Angus’s and Jake’s individual pages on the project are voluminous, and their websites generally much more up to date!

Saratoga Today profiled us, as did Skidmore news. There’s even an episode of the This is Skidmore podcast where we talk about it. Radio about radio.

Throughout the spring, I led a monthly workshop at the Tang Museum called SoundMind, and I’m psyched to share that it will be returning this fall: September 8, October 13, November 10.

From the museum’s website: “SoundMind is a workshop that combines meditation, sensory awareness, and aesthetic activation of the breath, body, and voice. Alone, in pairs, and as a group, participants will explore resonance and vibration through touching, listening, and collaborative creation.”

The Skidmore news office wrote a little piece about it, which you can find here.

Some other time, I’ll post some documentation and write something about how I came to develop this practice, which combines insights I’ve mined from heroes like Pauline Oliveros, Marina Abramovic, Karl Berger, and others.

Pursuing a longstanding and intensifying interest in reverberant space and natural resonance, I made the trek across the Vermont border to perform in this spectacular series earlier this summer, and was rewarded with a lovely recording of myself playing alto sax atop a pile of rubble in an underground lake. I’m on cut 4.

Excited to report that an article I wrote inspired by my work with the Universal Language Orchestra has just come out in Leonardo Music Journal, which happens to be one of my absolute favorite scholarly/creative publications, helmed as it is by the oft-imitated by ultimately inimatable Nicolas Collins.

My article: Experimental Music with Young Novices: Politics and Pedagogy. 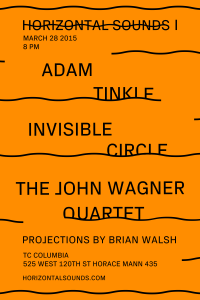 If you happened by Teacher’s College, Columbia University on Sat 3/28/15, you would have had the pleasure of seeing the debut of the Adam Tinkle Mystic-Civic Participation Pressure Group, my new project exploring the collision of post-AACM free improvisation, electroacoustic sound/noise art, and the broad-based participatory strategies of Cardew’s Scratch Orchestra and Pauline Oliveros’ Sonic Meditations. Joining me on stage were longtime collaborators Will Brant (guitar/electronics) and Jake Nussbaum (drums).

The event we played at was the debut of the Horizontal Sounds series, sponsored by TC Coumbia’s Music and Music Ed departments, which was perfect, (a) because Horizontal is my middle name and (b) because the ethos of experimental music participation is all about that horizontality. Consider booking the ATMCPPG (ATM Pressure Group for short) for your next anti-austerity rally, teambuilding retreat or shamanic self-realization ritual.

On February 9th, 2015, Joe Mariglio and I trekked up from San Diego to Palo Alto to premiere our new performance piece, “They Shoot Lasers, Don’t They?,” at the beautiful CCRMA stage on the Stanford campus.  The proper two-camera documentation of the whole thing is forthcoming, but I wanted to just share some early photos, and the text I delivered at the beginning, which set the tone for the sounds, visuals and somatics that followed:

well as this interferface) is our main area of research, inquiry, grant-seeking and grant-getting at CREOSOTA, which as you may know, stands for the Center for Research in the Evolution of Organisms, Sound Objects, and their Teaching Assistants.